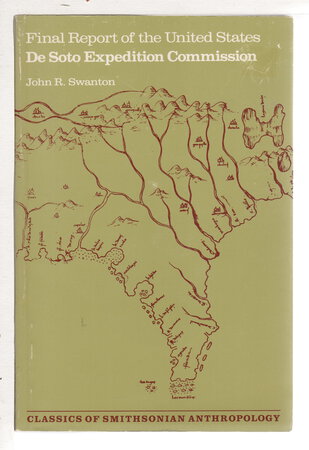 Washington, D.C.: Smithsonian Institution Press, (1985). The De Soto expedition of 1539-1543 was the first major European expedition to penetrate deep into what is now the Southeastern United States. This reprints the 1938 commission report (along with a substantial new introdution) of the attempt, 400 years after he landed in Florida, to determine his route from Florida, through Georgia and eastern highlands (South Carolina, North Carolina, Tennessee and Northern Alabama) and on to Louisiana, the Mississippi and more. This covers previous attempts to locate the route of De Soto and Moscoso, as well as information about the original expedition. New introduction by Jeffrey Brain which includes an update of De Soto studies. A title in the Classics of Smithsonian Anthropology series. Several appendices with maps, bibliography, list of participants in the original expedition and more. lxxi, xvi, 400. ISBN: 0-874748933.