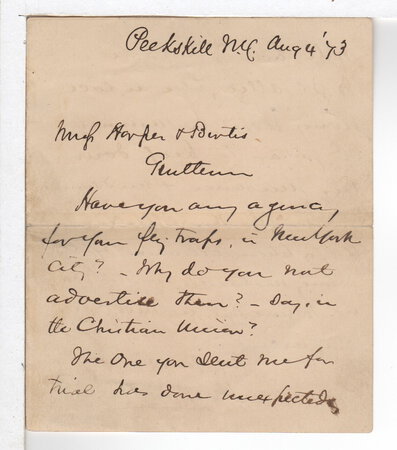 1873. SIGNED - A holographic note which reveals both the domestic and the promoter side of this noted preacher, abolitionist and suffragist, the brother of novelist Harriet Beecher Stowe. Dated at Peekskill NY on Aug 4, '73 this is addressed to Mssrs Harper and Burtis and reads in part "Have you agents for your fly traps in New York City? Why do you not advertise them? say in the Christian Union? The one you sent me for trial has done unexpectedly well, and I would like to get others . . . " followed by his suggestion to increase its effectiveness and SIGNED in full Henry Ward Beecher. Note covers both sides of one small sheet of paper, measuring 5x 6 inches, folded once in the middle. Interestingly, Harper and Burtis were involved in a patent dispute relating to their flytraps in 1881.