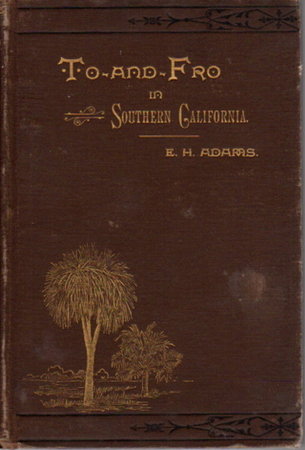 TO AND FRO IN SOUTHERN CALIFORNIA with Sketches in Arizona and New Mexico.

Cincinnati: W.M.B.C. Press, 1887. Hardcover first edition - Although this is presented in 'chapter form' this interesting look at Los Angeles area, consists primarily of the author's letters which were written to several Eastern newspapers describing her travels in Southern California during 1884 and in the autumn of 1886. Also included are chapters describing her travels in Arizona and New Mexico. From the author's preface: "From its nature, the book is in but slight sense a guide to persons visiting Southern California, although its pages embrace much reliable information about the country and its people.... The writer has aimed to build, out of the many sketches and facts given, a pleasant and readable book" - a modest aim, in which she has succeeded admirably, making this book enjoyable even now, well over 100 years later. Among the topics covered are a visit with historian Hubert Bancroft, the California missions, life in a canyon outside Los Angeles, the port of San Pedro, the growing of raisins, rural Riverside, the schools in Los Angeles - and a chapter on women as cultivators of the soil, which comments on how women have become land owners, involved in real estate, and in such agricultural pursuits as managing a raisin vineyard. 288 pp.

Condition: Very good overall in the original brown cloth with gilt lettering on the front and spine, gilt illustration on lower section of front cover, 2 decorative black-stamped bands. (spots in the margin of 2 pages, minor shelfwear to boards, otherwise tight and clean.)