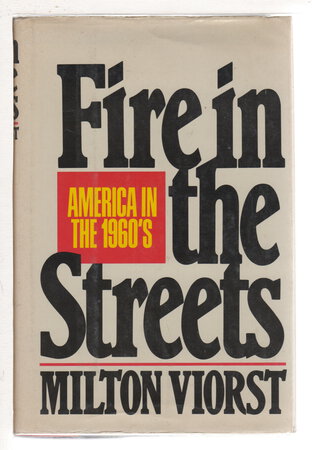 New York: Simon & Schuster, (1979) dj. Hardcover first edition - Although written about a period in US history more than 50 years ago, these comments on the dust jacket flap are still relevant: "A people who had taken for granted a collective commitment to public order was suddenly stunned by the fragility of its institutions and the assaults on the values they represented. This is the story of how Americans for the first time took to the streets, sometimes the tens of thousands, to resolve disputes once left to the established governmental process." This book recreates the era. in all its contradictions, through interviews with fourteen men, Including Allen Ginsberg, Jerry Rubin, Black activists likes E.D. Nixon, John Lewis, James Farmer, Stokely Carmichael, and more. The fact that all of those interviewed were men highlights one difference between that era and ours. Surprisingly uncommon in the hardcover first edition. Illustrated with black and white photographs. Bibliography, index. 591 pp. ISBN: 0-671243233.

Condition: Near fine in very good dust jacket (some minor edgewear to dj, creasing on dj flap, original price of 14.95 on dj flap)