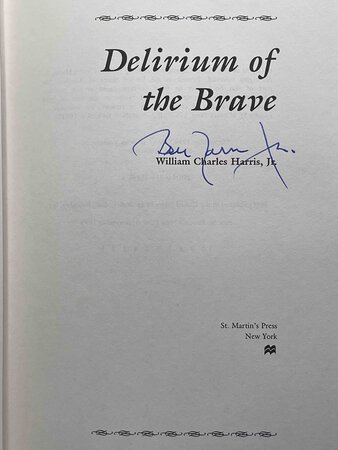 DELIRIUM OF THE BRAVE.

New York: St Martin's, (1999) dj. SIGNED hardcover first edition - The author's first novel. Set in Savannah, Georgia, this is a story of history, intrigue, war, and love, which follows four generations of families contemplating the pain of the past and the promise of the future. After many years, four friends will meet on the island where legend has it that a Confederate soldier and his manservant buried the Driscoll family's treasure, before they died on that island. SIGNED on the title page. This is one of the copies which, due to a printer's error, have a blank page for page 366. However, a page with the missing text is laid in, and both the blank page and the laid in page have also been SIGNED by Harris (with "Say What!" on the blank page). 372 pp. ISBN: 0-312254954.