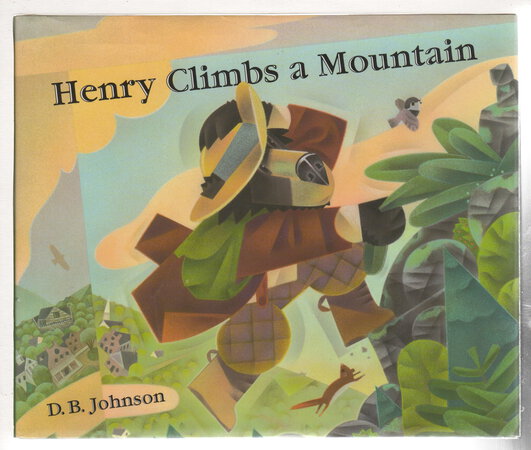 Boston: Houghton Mifflin, 2003. dj. Hardcover first edition - The third book in the author/illustrator's award winning books inspired by the works of Henry David Thoreau - this one is based on Thoreau's speech on Civil Disobedience. "Feeling the yen for a mountain hike, Henry the bear sets off to retrieve one of his shoes from the cobbler. But before he can pick it up, he is jailed for nonpayment of taxes. While there, Henry uses crayons and his imagination to create for himself a new shoe, trees, and a mountain path to explore. At the top of his imaginary mountain, he meets an unnamed, barefoot traveler. Although the stranger's comments indicate that he is an escaped slave seeking freedom, his fur is the same color as Henry's - they are, after all, both bears. Henry gives the traveler his shoes and best wishes, then returns barefoot to his cell. . . The colored-pencil-and-paint illustrations, filled with stylized, geometric forms, incorporate natural and historical details, such as posters offering rewards for the return of escaped slaves." (School Library Journal) Large oblong format, unpaginated. ISBN: 0-618269029.