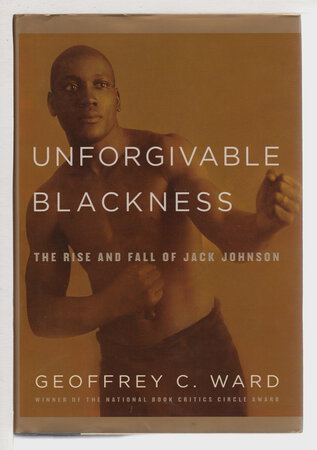 UNFORGIVABLE BLACKNESS: The Rise and Fall of Jack Johnson.

New York: Alfred A. Knopf, 2004. dj. Hardcover first edition - A full-scale biography of Jack Johnson - the first black heavyweight champion in history, and the most celebrated - and most reviled - African American of his age. "At a time when whites ran everything in America, he took orders from no one and resolved to live as if color did not exist. While most blacks struggled just to survive, he reveled in his riches and his fame. And at a time when the mere suspicion that a black man had flirted with a white woman could cost him his life, he insisted on sleeping with whomever he pleased, and married three. Because he did so the federal government set out to destroy him, and he was forced to endure a year of prison and seven years of exile." This draws on much new material, including Johnson's never-before-published prison memoir. Illustrated with more than fifty photographs. Notes, bibliography, index. Slightly oversized format. 492 pp. ISBN: 0-375415327.