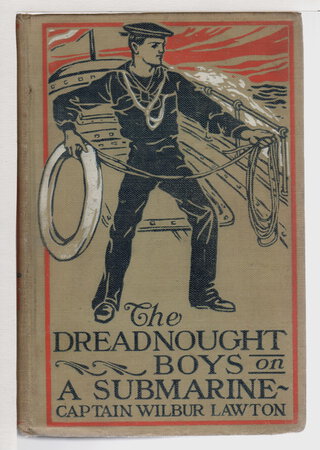 THE DREADNOUGHT BOYS ON A SUBMARINE #3 in the series.

New York: Hurst and Company, (1911). Hardcover first edition - Written in the years just preceding the first World War, this begins with the young inventor of an advanced submarine turning down a lucrative offer for his company because they will be selling them to another country - the submarine is for Uncle Sam or no one! Illustrated with a glossy frontispiece and two internal plates on plain paper stock. In an unusual economical move, the font and the line spacing in the last two chapters is much smaller and closer than in the rest of the book. 314 pp.