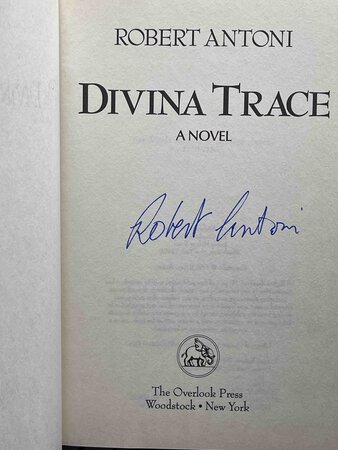 Woodstock, NY: Overlook Press, (1992) dj. SIGNED hardcover first edition - The author's first novel, 1992 winner of the Commonwealth Writers Prize for Best First Novel, set in the "fictional world" of "Corpus Christi", an invented island (based on Trinidad). The central narrator, Johnny Domingo, relays the story of the mysterious Magdalena and her frog child, as he hears it from seven different narrators, each speaking their own distinctly Caribbean dialect. Antoni has won many other awards for his work - among them the 1999 Aga Khan Prize for Fiction by The Paris Review for "My Grandmother's Tale of How Crab-o Lost His Head" and a Guggenheim Fellowship for 2010 for his work on the historical novel "As Flies to Whatless Boys." SIGNED on the title page. Mirror bound in. 427 pp. ISBN: 0-879514450.

Condition: Very near fine in a fine dustjacket (some light toning to the pages).