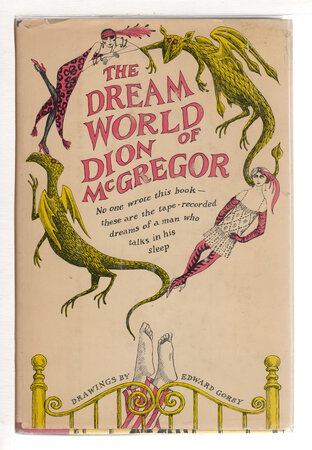 THE DREAM WORLD OF DION McGREGOR.

New York: Bernard Geis Associates / Random House (1964) dj. Hardcover first edition - An uncommon Edward Gorey illustrated book, one which transcribes the sleep-talking of an aspiring songwriter, who was couch-surfing in New York when his roommate recorded these dreams. More than 70 "unearthly, bizarre and often hilarious tapes" -from a balloon ride through a fleet of storks to a giant's piano and a classroom of nude artists - are included, illustrated throughout with pen and ink drawings, many full page, by Gorey ("etched in living dolour"). Both the recording of these dreams (where Gorey did the album cover) and this book were a flop when first published. Apparently 10,000 copies were printed, but only 6 or 7 thousand sold. However after the death of McGregor, more recordings were released and an experimental documentary film was made in 2017. Prefaced by a word from the dreamer and an introduction by Dr Valentine Wolf Zetlin. Bound in yellow paper-covered boards with a Gorey illustration on front, salmon cloth spine with black lettering and an illustration of a lizard. x, 213 pp.

Condition: Near fine in very good dust jacket (small chips to the ends of the dj spine, some rubbing and light toning to dj, original price of $3.95 on dj flap) - despite the flaws, this is an attractive copy, clean and tight - in much better condition than usually found.