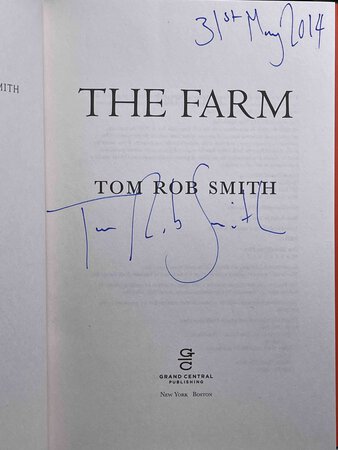 New York: Grand Central Publishing, (2014) dj. SIGNED hardcover first edition - An intricate psychological thriller, the fourth novel by the author of the award-winning "Child 44" trilogy. "Daniel believed that his parents were enjoying a peaceful retirement on a remote farm in Sweden. But with a single phone call, everything changes. 'Your mother...she's not well,' his father tells him. 'She's been imagining things - terrible, terrible things. She's had a psychotic breakdown, and been committed to a mental hospital.' Before Daniel can board a plane to Sweden, his mother calls: 'Everything that man has told you is a lie. I'm not mad... I need the police... Meet me at Heathrow.'
Daniel finds himself caught between his parents, and unsure of who to believe or trust." SIGNED on the title page and dated in the year of publication. 356 pp. ISBN: 978-0446550734.