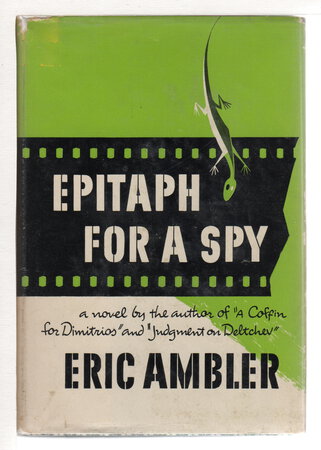 EPITAPH FOR A SPY. With a footnote by the author.

New York: Alfred A. Knopf, 1952. dj. Hardcover first edition - First US publication of Ambler's third novel, originally published in the UK in 1938. Set against the backdrop of the French Riviera on the eve of World War II, this is the story of a stateless man, born in Hungary but with only an expired Yugoslavian passport, now living and teaching languages in France, who finds himself caught up in international espionage while on vacation, when his camera is accidentally switched and incriminating photographs are found on the roll in it. This is the novel which first introduced an 'everyman' as a protaganist - a sometimes bumbling anti-hero who unwittingly finds himself in a dangerous situation. Basis for the 1944 movie Hotel Reserve featuring James Mason and Lucie Mannheim. Includes an afterword by Ambler. Dustjacket art by Bill English.

Condition: Very good in very good dust jacket (one line is underlined on p 173, and the binding is cracking between pp 186-187, but overall it is still a sturdy, tight and attractive copy in a bright dust jacket with a bit of wear to the ends of the spine, original price of $3 still present.)