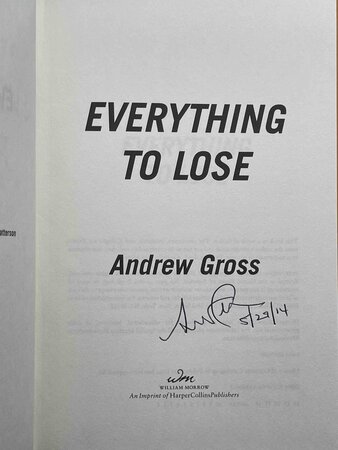 New York: Morrow (imprint of Harper Collins), (2014). SIGNED hardcover first edition - A thriller involving long buried secrets set in the aftermath of Hurricane Sandy on Staten Island in New York - A mother caring for her son with Aspergers becomes entangled in a murderous conspiracy to keep a twenty year old secret buried. "While driving along a suburban back road, Hilary Blum, who's just lost her job and whose deadbeat husband has left her alone witnesses a freakish accident. A car ahead of her careens down a hill and slams into a tree. Stopping to help, she discovers the driver deadand a satchel stuffed with a half a million dollars. That money could prevent her family's ruin and keep her special needs son in school. In an instant, this honest, achieving woman who has always done the responsible thing makes a decision that puts her in the center of maelstrom of dark consequences and life-threatening recriminations." SIGNED on the title page and dated in the year of publication. 325 pp. ISBN: 978-0061656002.