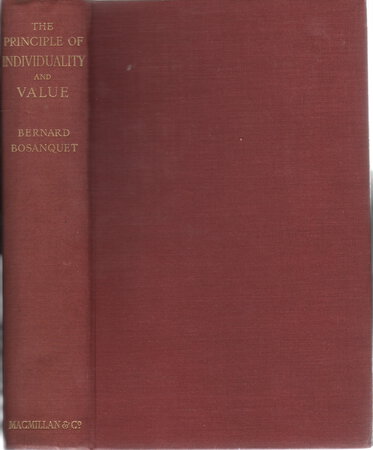 THE PRINCIPLE OF INDIVIDUALITY AND VALUE: The Gifford Lectures for 1911 Delivered in Edinburgh University.

London: Macmillan, 1927 (c 1912). Hardcover - The first of two books by this noted philosopher based on his Gifford Lectures. They serve as the most developed statement of his metaphysical views, but their publication incited a significant critical reaction to his views, especially on the controversy surrounding idealism and materialism and on the nature of finite individuality. Common to Bosanquet's work is a "desire to find common ground among philosophers of various traditions and to show relationships among different schools of thought, rather than to dwell on what separates them.. .At the time of his death, he was arguably 'the most popular and influential of the English idealists'." (Stanford Encylopedia of Philosophy) Index. xxxvii, 409 pp.