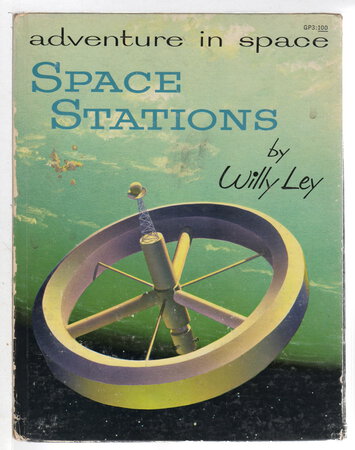 Poughkeepsie, N.Y: Guild Press/ Simon & Schuster, (1958). Hardcover first edition - The 3rd book in Ley's Adventure in Space series, illustrated mostly in full color by John Polgreen. Ley, a German-American science writer, was one of the pioneers of rocketry - at just 20 years old, he started his career as a member of Germany's Spaceflight Society and in 1935, he came to the United States, escaping Hitler. This book starts with a brief introduction - "The series is the story of the rocket age, of how Man will escape from the air ocean surrounding the earth and conquer the open space beyond it. This age is going to come much sooner that most people realize, and the establishment of the manned space station discussed in this book will be the largest single step in the conquest of space.We hope that this series will be the key that opens the door to the rocket age for you." Large format, 45 pages. bound in glossy illustrated boards. Although written for children, this a book which will appeal to adults also.

Condition: Good overall (the stapled text block is beginning to separate at the rear board, some rubbing and wear to the edges of the boards and sides of the spine, but an uncommon title in a relatively fragile binding)