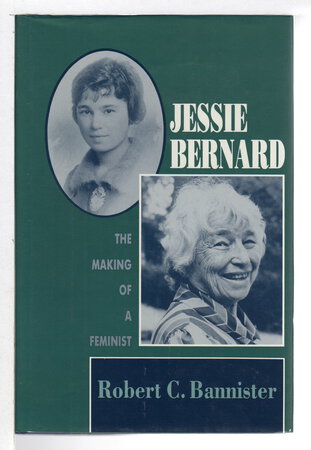 JESSIE BERNARD; The Making of a Feminist.

New Brunswick NJ: Rutgers University Press, (1991) dj. Hardcover first edition - Biography of this noted sociologist and prolific author, published a few years before her death. Following World War II, she began to move toward a feminist position in sociology as seen in the qualitative research and critical analysis prevalent in her later work. Among other things she was a founding board member of the Center for Women Policy Studies as well as member of the boards of Urban Institute Women's Program and the Women's Equity Action League and an associate of the Women's Institute for Freedom of the Press. Her focus was on increasing understanding of the effects of sexism on women's experience of marriage, parenting, education and economic life. Among her books were 'The Paradox of the Happy Marriage' (1971) and 'The Future of Marriage' (1972) based on her statistical analysis and research which illustrated that marriage was good for men, but not for women. Illustrated with photographs. Chronology, notes, bibliography, index. xii, 276 pp. ISBN: 0-813516145.