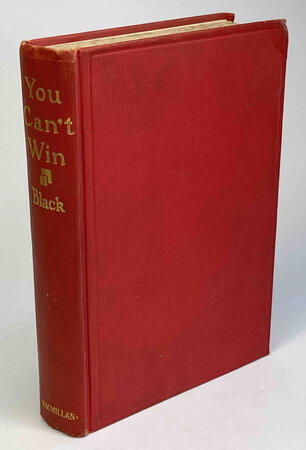 New York: Macmillan, 1926. Hardcover first edition - The autobiography of a professional burglar and hobo, Jack Black, this book describes describes his days on the road and as a professional thief, convict and escaped prisoner (his mother died when he was 10, and after a few years in a convent school, he hit the road at 14, was in the dock for burglary before he was 20 and by age 25 he was expert house robber) but it is even more an indictment of the criminal justice system. While this book was influential to writers like William S. Burroughs (who mentioned it in "Junkie" and who also wrote the foreword to the 1988 trade paperback) and the Beats, it is perhaps even more relevant to us now with its discussion on how the prison system can be a force for good - the library in a Canadian prison - and also something which dehumanize prisoners - including his experiences of flogging in Canada,and being constrained by a strait jacket at Folsom. Foreword by Robert Herrick. xi, 394 pp.

Condition: Very good in red cloth with gold lettering on the spine (offsetting to the endpapers, bookplate on front pastedown, corners somewhat bumped), no dust jacket.