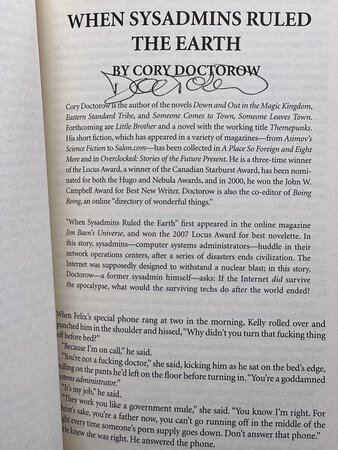 WASTELANDS: Stories of the Apocalypse.

San Francisco: Night Shade Books (2008). SIGNED first edition - An anthology which gathers together some of the best postapocalyptic literature of the last two decades by renowned authors of speculative fiction - including George R. R. Martin, Paolo Bacigalupi, Gene Wolfe, Orson Scott Card, Carol Emshwiller, Jonathan Lethem, Cory Doctorow, Octavia E. Butler, and Stephen King, edited and with an introduction by John Joseph . A book which explores the scientific, psychological, and philosophical questions of what it means to remain human in a postapocalyptic world. "Whether the end of the world comes through nuclear war, ecological disaster, or cosmological cataclysm, these are tales of survivors, in some cases struggling to rebuild the society that was, in others, merely surviving." SIGNED by TWO authors at their stories: Nancy Kress at "Inertia" and James Van Pelt at "The Last of the O-Forms." Each story contains an introduction by Adams. List of futher readings. 333 pp plus publisher's ads. ISBN: 9781597801058.