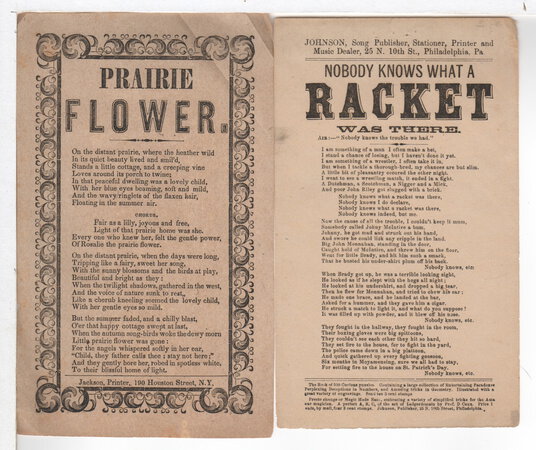 Set of 2 Mid-19th Century Song Sheets: NOBODY KNOWS WHAT A RACKET WAS THERE and PRAIRIE FLOWER.

Philadelphia & New York: Johnson Song Publisher / Jackson. nd (ca 1860s). The first of these sheets - "Nobody Knows What a Racket," to be sung to the tune of "Nobody Knows the Trouble I had" - is an example of the influence that Irish immigrants had on these sheets. One of the stereotypes of the Irish was that they never backed away from a fight, and this is a rollicking account of a barroom fight that wound up with the combatants (representing several ethnic groups) in prison for "setting fire to the house on St Patrick's Day." Plain sheet with the publisher's name above the lyrics and an advertisement for 2 books (published in 1859 and 1869) at the bottom. The second is a popular sentimental song by George Root, frequently printed but usually under the title of "Rosalie." This copy does not credit Root as the author. The lyrics are surrounded by a decorative border, the printer's name appears in a single line at the bottom. While neither of these are included in Wolf's American Song Sheets, a quote from the introduction gives a good sense of the popularity of these sheets: "A fad in American life produced a shower of song sheets, slip ballads and poetical broadsides. Although such sheets had been printed by enterprising publishers for centuries, it was not until about 1850 that it became big small-business. Then, to meet a growing popular demand sheets, which had once been printed by the score, appeared by the thousands. They were run off in large editions, sold wholesale to dealers and sold retail by hawkers and in stationery shops and book stores."

Condition: Good condition overall - printed on thin, fragile and somewhat toned paper, and Prairie Flower has some creasing to the upper corner.