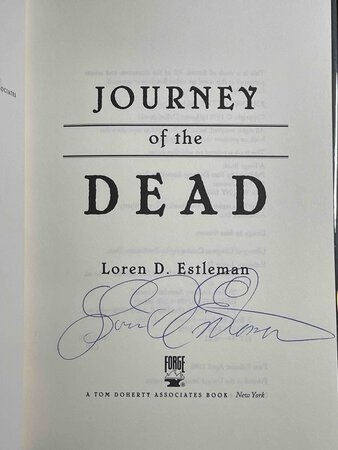 JOURNEY OF THE DEAD.

New York: Forge / Tom Doherty Associates, (1998) dj. SIGNED hardcover first edition - Although probably best known as an award winning writer of crime fiction, Estleman is equally praised for his historical fiction set in the American West - he has received four Western Writers of American Golden Spur Awards, three Western Heritage Awards. In this novel, An ancient Spanish alchemist in the Southwest is searching for the secrets of the gods, is visited by Pat Garrett, the man who killed Billy the Kid, who is haunted by him in his dreams. SIGNED on the title page. 351 pp. ISBN: 0-312859996.