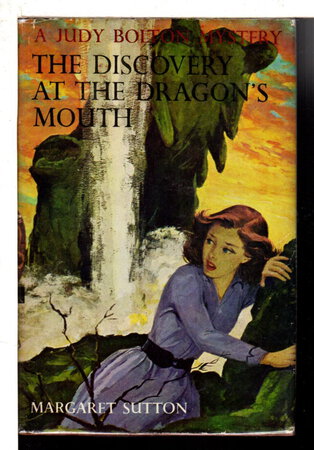 THE DISCOVERY AT THE DRAGON'S MOUTH: Judy Bolton #31.

New York: Grosset & Dunlap, (1960) dj. Hardcover first edition - A later title in this mystery series, which is in many ways, more realistic than most such series. Judy starts out as a high school girl, has some of the usual problems all kids encounter including misunderstandings among friends, etc, is a little older and more mature in each book - in fact, she gets married, and eventually she and her husband even adopt a child. In this book, while Peter is attending a training session at the FBI, Judy and her friend Honey decide to take a trip - a misunderstanding leads to them driving across the country to Yellowstone Park, where they will encounter danger the hot springs and a gang of thieves. Unlike most of the other series books published by Grosset and Dunlap, this was not part of the Stratemeyer Syndicate. Margaret Sutton was a real woman, writing under her own name. Because of the opposition of the Stratemeyer Syndicate, this series did not have the extensive reprinting that the Nancy Drew and Hardy Boys had. Frontispiece. Lists to self at front of book and on rear flap of dust jacket. . 182 pp.