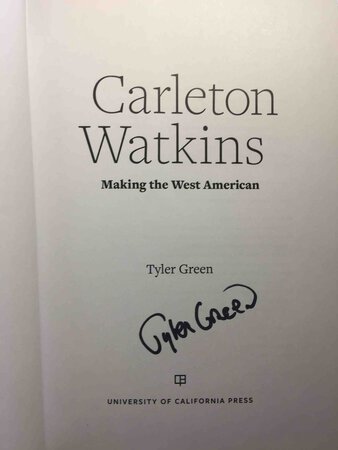 Berkeley, CA: University of California Press, (2018). SIGNED hardcover first edition - An award-winning book which looks at the influence Carleton Watkins had in shaping American thought. He is " widely considered the greatest American photographer of the nineteenth century and arguably the most influential artist of his era. . . Watkins made his first trip to Yosemite Valley and Mariposa Grove in 1861 just as the Civil War was beginning. His photographs of Yosemite were exhibited in New York for the first time in 1862, as news of the Unions disastrous defeat at Fredericksburg was landing in newspapers and while the Matthew Brady Studios horrific photographs of Antietam were on view. Watkinss work tied the West to Northern cultural traditions and played a key role in pledging the once-wavering West to Union. Motivated by Watkinss pictures, Congress would pass legislation, later signed by Abraham Lincoln, that preserved Yosemite as the prototypical 'national park,' the first such act of landscape preservation in the world." SIGNED on the title page. Illustrated with photographs throughout (list of illustrations at front of book). Notes, bibliography, index.xvii, 574 pp. ISBN: 978-0520287983.