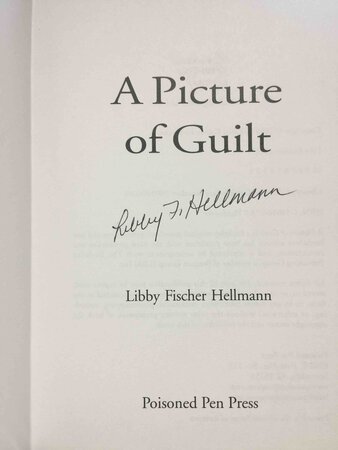 A PICTURE OF GUILT.

Scottsdale, AZ: Poisoned Pen Press, (2003). SIGNED hardcover first edition - The second mystery featuring Ellie Foreman. The Library Journal review stated "Chicago industrial filmmaker Foreman becomes involved in a murder case when she inadvertently provides a filmed alibi for the accused. Despite her testimony, the jury convicts him owing to an unconcerned defense lawyer, lack of supporting witnesses, and derogatory cross-examinations. Then, a fearful woman approaches Ellie with crucial evidence that could save the now-convicted man, but she dies that night in a suspicious car wreck. Before long, Ellie fancies links between the lawyer and smugglers - if not the mob. Recommended." SIGNED on the title page. 313 pp. ISBN: 1-590580737.