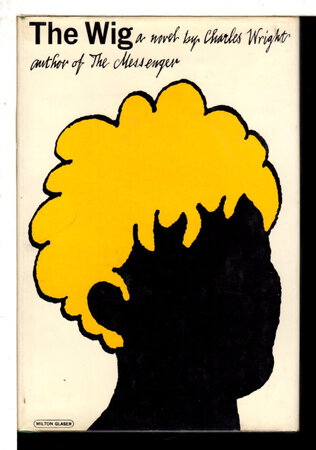 THE WIG: A Mirror Image.

New York: Farrar, Straus & Giroux, (1966). Hardcover first edition - The author's second novel, a surreal look at 1960s New York as shown in the story of Lester Jefferson, "a rambunctiously outgoing and terminally callow variation on Wrights urban-loner persona. Lester is determined to capitalize on the transformative potential of Lyndon Johnsons Great Society with some bold transformations of his own. These begin with the vigorous application of something called Silky Smooth Hair Relaxer ('with the Built-in Sweat-proof Base'), thus bringing to life the eponymous 'wig': a lustrously silken hairdo that so boosts his self-esteem (I hadnt felt so good since discovering last year that I actually disliked watermelon) that he believes nothing less than the American Dream is within reach." (Gene Seymour) A book which anticipated the work of Fran Ross, Paul Beatty, Darius James, and Ishmael Reed (who calls this novel a landmark in African American fiction.) 179 pp. Dust jacket by Milton Glaser.