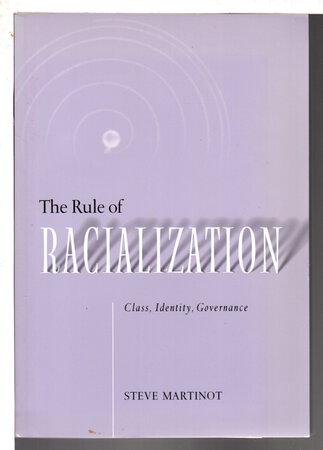 Philadelphia: Temple University Press, (2002). First edition - A book which takes a "new look at the invention of whiteness and how the inextricable links between race and class were formed in the seventeenth century and consolidated by custom, social relations, and eventually naturalized by the structures that organize our lives and our work. Arguing that, unlike in Europe, where class formed around the nation-state, race deeply informed how class is defined in this country and, conversely, our unique relationship to class in this country helped in some ways to invent race as a distinction in social relations. Martinot begins tracing this development in the slave plantations in 1600s colonial life. He examines how the social structures encoded there lead to a concrete development of racialization. He then takes us up to the present day, where forms of those structures still inhabit our public and economic institutions." A title in the Labor In Crisis series. Notes, index.xii, 240 pp. Review copy with publisher's materials laid in. ISBN: 1-566399823.