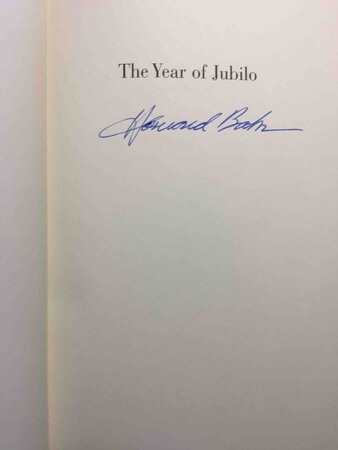 THE YEAR OF JUBILO: A Novel of the Civil War.

New York: Henry Holt, (2000) dj. SIGNED hardcover first edition - The second novel by the author of the highly praised and award-winning 'The Black Flower,' this is set in Cumberland, Mississippi, in the summer of 1865. "A reluctant soldier, Gawain Harper was goaded into joining the Confederate forces in 1862 by the rabid secessionist Judge Rhea, father of the woman Harper loves. After three years of fighting the Union, the former professor of literature is now trudging home defeated and confused. The South of his past has indeed vanished, and the town Harper returns to is now governed by the victorious (but wary) soldiers of the North and overflowing with vengeful planters, opportunistic spies, and the fear and ingrained attitudes of its vanquished citizens." SIGNED on the half title page. 376 pp. ISBN: 0-805059725.