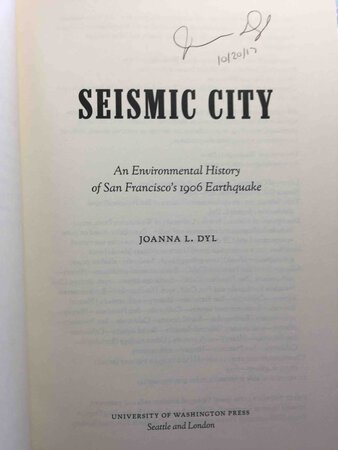 Seattle: University of Washington Press, (2017). SIGNED hardcover first edition - A detailed study of the 1906 San Francisco earthquake, one which examines the decades leading up to the catastrophic event and the city's recovery from it. In their zeal to rebuild, leaders of the city downplayed the risks and took actions which increased the danger going forward. A book which combines urban environmental history and disaster studies and shows how the crisis and subsequent rebuilding reflect the interplay of natural and human influences that have shaped San Francisco. SIGNED on the title page and dated in the year of publication. A title in the Weyerhaeuser Environmental Books series. Illustrated with photographs. Extensive notes, index. xvii, 355 pp. ISBN: 978-0295742465.