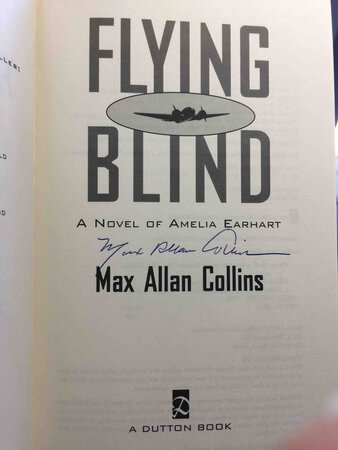 New York: Dutton, (1998) dj. SIGNED hardcover first edition - The ninth Nathan Heller novel, one with a convincing blend of history and speculation. In 1970, Heller has been persuaded by an Earhart researcher to revisit Saipan where he believed she had been held after her disappearance in 1937 on a flight around the world, Back in 1935, Nate Heller was hired by her publicity-hungry husband to escort Amelia Earhart on a speaking tour due to numerous death threats, and they became very close. During World War II, after her disappearance Heller is enlisted in a clandestine search of Japanese waters for her and he discovers a treacherous plot involving marital betrayal and the U.S. government. His failed attempted rescue then leads him to return, many years later, to extract his final revenge. SIGNED on the title page. Author's note. 343 pp. ISBN: 0-525943110.