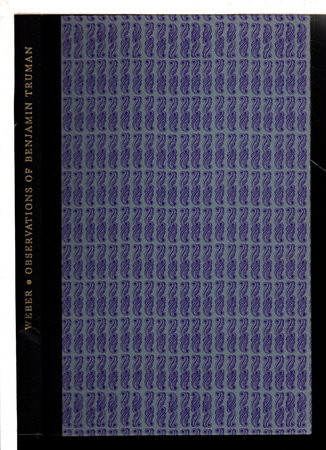 Los Angeles: Dawson's Book Shop, 1978. Hardcover first edition - One of 400 copies printed by Grant Dahlstrom at the Castle Press. Truman had a long and varied life, including working for Andrew Johnson in Tennessee and later in the White House - he first went West in 1866 as a special agent for the US Postal Service. These observations on El Camino Real were originally published in newspaper form in 1867, but were not included in his 1903 publication of the Missions of California. They have been collected from clippings in his scrapbook, edited, and annotated by Weber. Illustrated with several sections of sepia tone photography by A. C. Vroman of the Missions and a black and white frontispiece photograph of Truman with his wife and daughter. xvi, 109 pp. ISBN: 0-870933094.