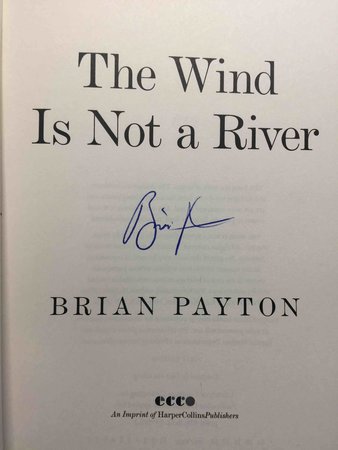 THE WIND IS NOT A RIVER.

New York: Ecco Press / Harper Collins, (2014). SIGNED first edition - An historical novel that brings to life an almost forgotten event during World War II - the Japanese bombing of the Aleutian islands, and their seizure of two of the outermost islands. A journalist leaves behind his wife Helen, "after an argument they both regret, and heads north from Seattle to investigate the Japanese invasion of Alaska's Aleutian Islands, a story censored by the U.S. government. While John is accompanying a crew on a bombing run, his plane is shot down over the island of Attu. He survives only to find himself exposed to a harsh and unforgiving wilderness, known as "the Birthplace of Winds." There, John must battle the elements, starvation, and his own remorse while evading discovery by the Japanese." SIGNED on the title page. 305 pp.