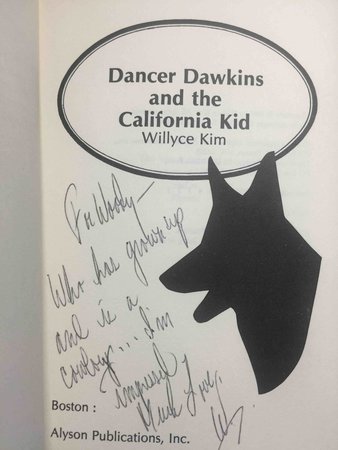 DANCER DAWKINS AND THE CALIFORNIA KID.

Boston: Alyson Publications, (1985). SIGNED first edition - The first novel (preceded by three books of poetry) by this Korean American lesbian author, who was born in Honolulu, and who has been called the first openly lesbian Asian writer to be published in the United States. Described as politically incorrect - and as a "rip-roaring Western adventure" (Judy Grahn) INSCRIBED on the title page by the author (simply signed "W"). Also contains a signed and dated holographic poem inside the back cover. 133 pp plus 4 pp publisher's ads. ISBN: 0-932870597.