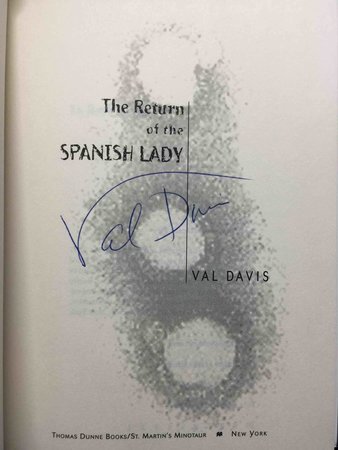 THE RETURN OF THE SPANISH LADY.

New York: St Martin's Minotaur, (2001). SIGNED hardcover first edition - The fourth novel written by the Irvines under this pseudonym and the fourth in the series featuring archeologist Nicolette Scott, whose interest in early planes (and her father's influence) has gotten a position at the Smithsonian. A search for a downed Japanese fighter plain in a wilderness reserve in Alaska is funded by the head of a major pharmaceutical company - whose real interest is in the bodies of some 1919 gold seekers who died of the Spanish flu. SIGNED on the title page. 307 pp. ISBN: 0-312262248.