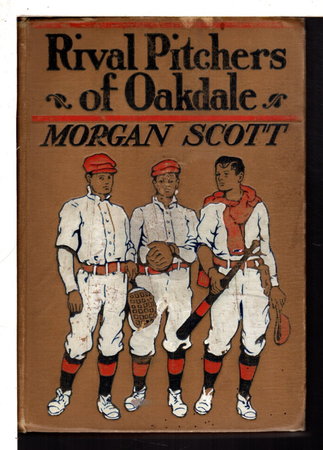 RIVAL PITCHERS OF OAKDALE, #3 in the Oakdale Academy Series.

Edition: First or early edition by the original publisher.

New York: Hurst and Company, (1911). Hardcover first edition - The third book in this six book series. "Baseball is the main theme of this interesting narrative, and that means not only clear and clever descriptions of thrilling games, but an intimate acquaintance with the members of the teams who played them. The Oakdale Boys were ambitious and loyal, and some were even disgruntled and jealous, but earnest, persistent work won out." lllustrated with a frontispiece and three glossy internal plates by Elizabeth Colborne. 311 pp.

Condition: Good overall in illustrated brown cloth - some dampstaining/discoloration to upper edge of back cover, not affecting the text, but some of the plates have tide marks in the upper margins. Gift inscription on front endpaper. A tight, straight copy.