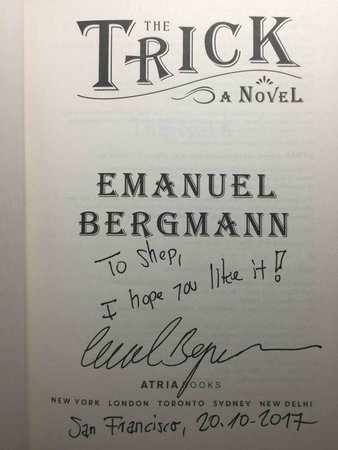 New York: Atria (Simon & Schuster), (2017) dj. SIGNED hardcover first edition - The author's first novel -a story about a young boy who believes in magic and a disillusioned old man who believes in nothing. Ranging from 1934, where a rabbi's son in Prague joins a traveling circus, becomes a magician, and rises to fame under the stage name the Great Zabbatini just as Europe descends into World War II. When Zabbatini is discovered to be a Jew, his battered trunk full of magic tricks becomes his only hope of surviving the concentration camp" to 70 years later, when a 10 year old boy finds a scratched LP that captures Zabbatini performing his greatest tricks. INSCRIBED on the title page and dated in the year of publication. 375 pp. ISBN: 978-1501155826.