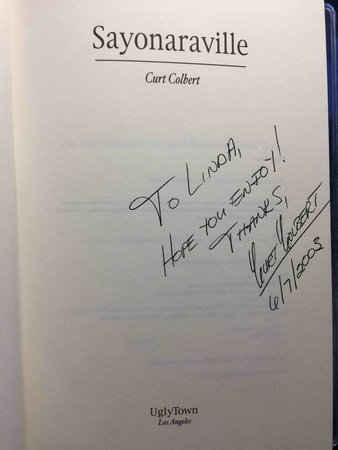 Los Angeles: Uglytown Productions, (2003). SIGNED first edition - The second in this series set in Seattle in the years after World War II and featuring Jake Rossiter and Miss Jenkins. "Who chopped off insurance agent Henry Jamison's head with a Samurai sword, and why? While trying to figure this out, Seattle private detective Jake Rossiter also has to deal with his recently promoted junior partner, Miss Jenkins, who is about to take on the Hashimoto family as clients for her first official case. Rossiter, an ex-marine who finished out World War II in the Pacific just a few years ago, couldn't care less about the Hashimotos -- Japanese Americans who were interned during the war and subsequently lost their Seattle dimestore in a suspicious fire." INSCRIBED on the title page and dated in the year of publication. 287 pp. ISBN: 0-972441212.

Condition: Fine in glossy illustrated wrappers with self-flaps (in a protective cover).