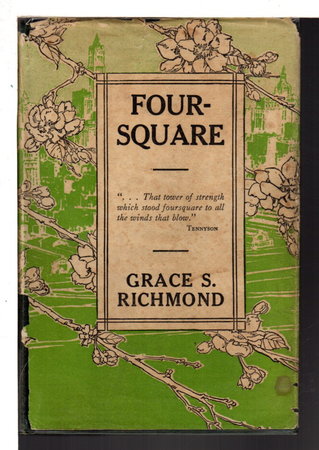 Garden City, NY: Doubleday, Page & Co., Inc., 1922. Hardcover first edition - Romantic novel centered on a talented young woman at a turning point in her career and a college professor and book collector. "When on one blustering afternoon in late March Professor Mark Fenn came into the dingy old college book-shop which was one of his favourite haunts, he passed by the magazine stand in a hurry, though it was thick with all the newest April publications and vivid with their colour. His mind was upon a certain row of bookshelves in the dimmest part of the back of the shop, where he had yesterday discovered rich treasure. Almost an hour later, when he had decided, rather against his judgment but wholly according to his inclination, to purchase the full tale of seven books which he needed to complete a special group in his collection, he passed the magazine stand again, and this time he halted. He had caught sight of the name of Mary Fletcher, emblazoned in large letters upon the cover of The Centrepiece." Although almost forgotten now, Richmond was both a prolific and highly-paid popular author who was never out of print for almost 40 years - reportedly Doubleday sold over 2 1/2 million copies of her books. Green white illustrations on the title page and other preliminary pages, Decorations by Lee Thayer and frontispiece by H. R. Ballinger. Black and white illustrations on the first page of each chapter. green illustrated endpapers with the design reproduced on the dust jacket. Attractively bound in darker green cloth with gilt lettering, design and border. 358 pp.

Condition: Very good in a fair only dust jacket (some spint slant, dust jacket is missing over an inch at the bottom of the spine cover, other chips and edgewear).