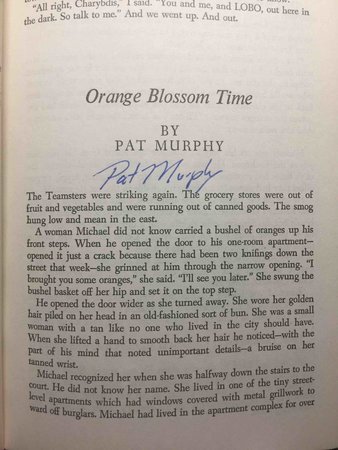 Garden City, NY: Doubleday, 1981. dj. SIGNED hardcover first edition - An anthology of original short stories, edited and with an introduction by Roy Torgeson. SIGNED by Pat Murphy at her story 'Orange Blossom Time.' Also includes A Good Place to Be by Cynthia Felice, A Child of Earth and Starry Heaven by Somtow Sucharitkul; Tomorrow Morning by Nicholas Yermakov; The Hashed Brown Buggy by Margaret St Clair; Dancing in the Dark by Glenn Chang; Again the Hit and Run and The Sound of Hawkwings Dissolving by Steve Rasnic Tem; by ; The Ballad of Lady Blue by Karl Hansen; That They Be Saved by Al Sarrantonio; Hunting the Dragonblood by Patrick H. Adkins and Gemini by Tanith Lee. 186 pp. ISBN: 0-385-172516.

Condition: Very near fine in a like dustjacket (remainder spray)