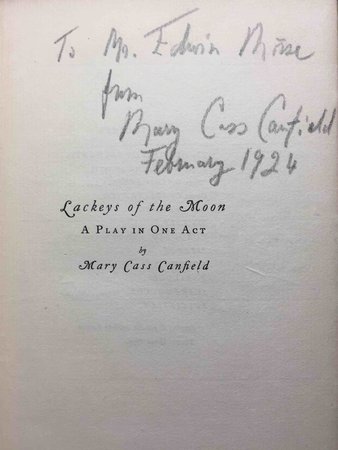 LACKEYS OF THE MOON: A Play in One Act.

New York: Edmond B. Hackett / Brick Row Book Shop, 1923. SIGNED hardcover first edition - Copy obviously used to rehearse and perform this play (set in Venice, Italy about 1750) with extensive notations in pencil, including several bold "music" comments. INSCRIBED by the author on the half title page and dated in Feb. 1924. In addition, this copy has been SIGNED by all of actors on the list of characters. "Prize one-act play, 1923 play contest of the San Diego Players." Cass was a poet and critic, and at least one of her later plays was performed on Broadway. 47 pp.