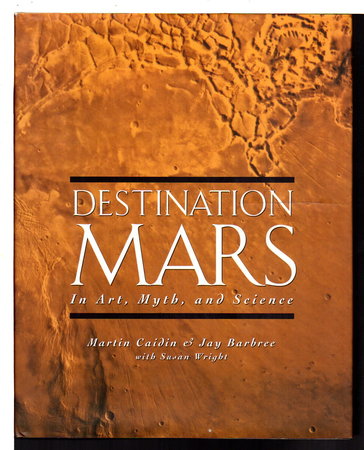 New York: Penguin Studio, (1997) dj. Hardcover first edition - A beautiful book, illustrated throughout with full color photographs, which looks at the history of Mars and how we have perceived this planet over the years. "Over the centuries the planet Mars lodged itself in the human imagination as a locus of hope, fascination, and fear. H.G. Wells's novel 'War of the Worlds' played on those fears and ushered in the golden age of science fiction. . . Mars became the preeminent destination of science fiction writers and movie makers, with the planet figuring in many masterpieces of the genre, including "Strange in a strange land" and "The Martian chronicles", and the works of Philip K. Dick." This looks at mythology, religion, astrology, folklore, early scientific history, science fiction and the modern era of scientific discovery and space travel, including NASA's Mariner and Viking missions of the 1960s and 1970s. Large square format. Index. 228 pp. ISBN: 0-670860204.

Condition: Very near fine in a near fine dustjacket (remainder mark, crease to bottom edge of dj)