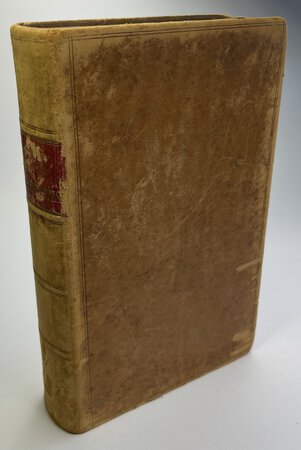 COMMENTARIES ON THE LAW OF PROMISSORY NOTES, and Guaranties of Notes, and Checks and Banks and Bankers. With Occasional Illustrations from the Commercial Law of the Nations of Continental Europe.

Boston: Little Brown, 1856. Hardcover - The last of Story's commentaries, originally published in 1845; the editor of this fourth edition, Edmund Hastings Bennett, states that more than 400 cases have been added. Joseph Story, who is perhaps best known for his opinion in The Amistad case, was not only the youngest person ever appointed to the Supreme Court at age 32, he was also one of the most influential, serving on the Court for 34 years, first under Marshall and then Tanney, until his death in 1845. List of cases cited, index. xxxvi, 696 pp.

Condition: Good condition overall, although the original tan leather binding has significant rubbing, previous owner's name on front endpaper and discoloration from binder's glue on endpapers, this is still a sturdy, tight copy.