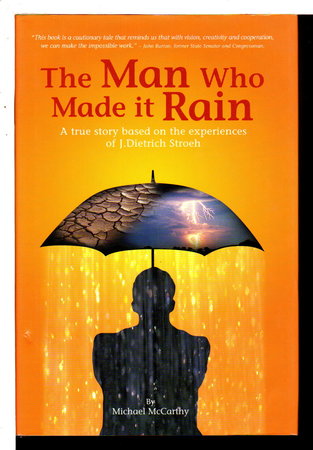 THE MAN WHO MADE IT RAIN: A True Story Based on the Experiences of J. Dietrich Stroeh.

Novato, California: Public Ink, (2006) dj. SIGNED hardcover first edition - A combination of fact and speculation, this includes an account of the unrelenting drought in 1976-77 in Marin County (when it did not rain for 25 months) and the efforts of J. Dietrich Stroeh, the General Manager of the Marin Municipal Water Board and his efforts to provide relief from the drought. In addition, it jumps ahead to a future in which global climate change is a reality. SIGNED by J. Dietrich Stroeh, the subject of the book, on the title page over his name and also briefly INSCRIBED by him. Introduction by former state senator John Burton, afterword by Stroeh. xii, 419 pp. ISBN: 0-977237109.