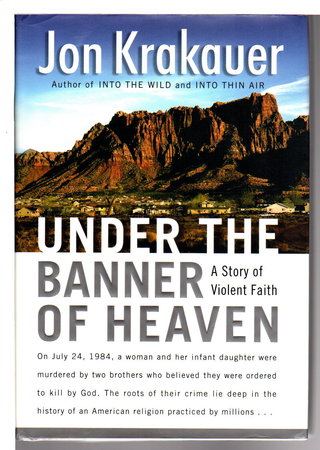 UNDER THE BANNER OF HEAVEN: A Story of Violent Faith.

New York: Doubleday, (2003) dj. Hardcover first edition - "On July 24, 1984, a woman and her infant daughter were murdered by two brothers who believed they were ordered to kill by God. The roots of their crime lie deep in the history of an American religion practiced by millions." A look into the world of Mormon fundamentalists, who believe that the Mormon Church went astray when it renounced polygamy. Basis for the television series of the same name. Maps, notes, bibliography, index. xxiii, 372 pp. Map endpapers. ISBN: 0-385509510.