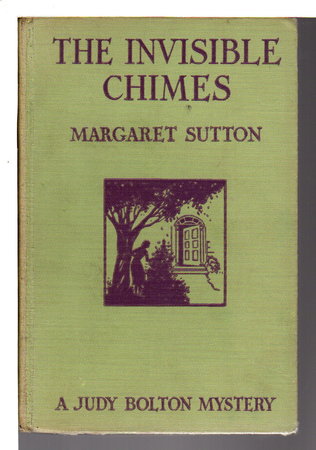 New York: Grosset & Dunlap, (1932.). Hardcover first edition - The third book in this mystery series (the first 3 were all issued in 1932), which is in many ways, more realistic than most such series. Judy starts out as a high school girl, has some of the usual problems all kids encounter including misunderstandings among friends, etc, is a little older and more mature in each book - in fact, she gets married, and eventually she and her husband even adopt a child. The "mysteries" are mostly based on actual events, the town is the town where Sutton grew up and unlike most of the other series books published by Grosset and Dunlap, this was not part of the Stratemeyer Syndicate. Margaret Sutton was a real woman, writing under her own name. Because of the opposition of the Stratemeyer Syndicate, this series did not have the extensive reprinting that the Nancy Drew and Hardy Boys had. Illustrated by Pelagie Doane with a glossy frontispiece and three inserted plates. 213 pp. plus 3 pp publisher's ads. Lists to self and Nancy Drew Mysterious Letter at back of book,. ISBN: B07MJRFJY9.

Condition: Good+ condition in the original thicker light green format with magenta endpapers with the 'flashlight' illustration (a bit of insect damage to lower corner of textblock,sunning to the spine, prev owner's name dated in 1933), no dj.