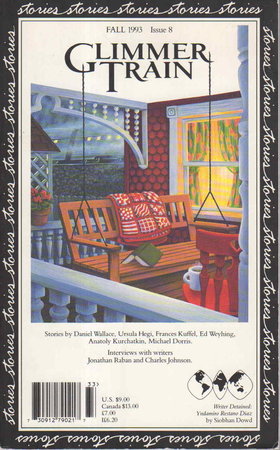 Portland, OR: Glimmer Train Press, 1993. SIGNED first edition - Includes stories by Daniel Wallace, Ursula Hegi, Michael Dorris and others, plus interviews with writers Jonathan Raban and Charles Johnson. SIGNED by Charles Johnson at his interview. Each story is preceded by a picture of the author as a child, brief autobiographical comments, and a printed example of their signature. Several authors in each issue also contribute to the comments and photographs found in the "Last Pages" at the end of each issue. A rather idiosyncratic journal, edited by two sisters, but one which consistently publishes excellent fiction. 168 pp. We specialize in literary journals, and have many others - including many not yet catalogued and listed on line. ISBN: 1880966-077.