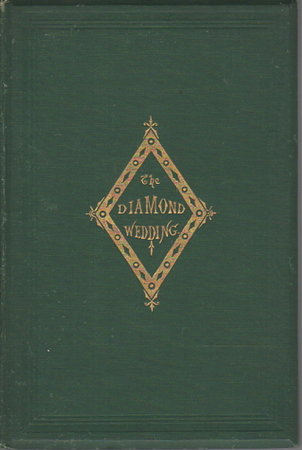 THE SIXTIETH ANNIVERSARY OF THE MARRIAGE OF JOHN J. AND SARAH ANN KNOX, OCT 7TH, 1873 together with SKETCH OF THE LIFE OF CAPTAIN JOHN J. KNOX WILLIAMS, Oldest Grandson of John J. and Sarah A. Knox, Who Fell in Defence of His Country at the Battle of Chapin's Farm, September 29-30, 1864.

New York: Edward O Jenkins 1873. Hardcover first edition - Printed "For Private Circulation". Includes an account of the celebration of the sixtieth wedding anniversary (the cover has simply "The Diamond Wedding" on it) of the marriage of John and Sarah Knox of Knoxville, in upstate New York, followed by "A sketch of the military life of Captain Williams with the 117th New York Infantry Regiment, prepared by Rev. Knox from Williams' letters and read at the celebration." This sketch includes 7 small maps and much interesting information about troop movements, descriptions of battles, daily life, and more. The first part consists of 44 pages, illustrated with engravings of the old homestead, the family tree and the church. The Civil War sketch is from page 45-106 followed by a list of members of the family present. INSCRIBED by one of the family members "for Mrs Ewing, your cousin, Mrs Anderson" (perhaps the one of the sisters who prepared the family tree) 107 pp. .

Condition: Near fine in dark green cloth with gilt stamping on the front cover. Uncommon.