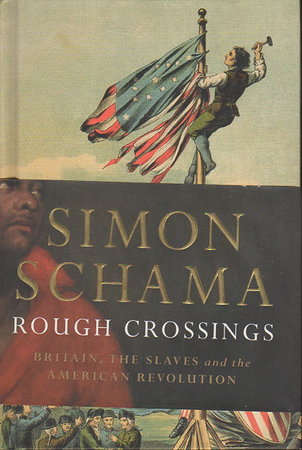 ROUGH CROSSINGS: Britain, the Slaves and the American Revolution.

New York: Ecco Press, (2006.). Hardcover first edition - From the dust jacket: "If you were black in America at the start of the Revolutionary War, which side would you want to win? When the last British governor of Virginia declared that any rebel-owned slave who escaped and served the king would be emancipated, tens of thousands of slaves fled from farms, plantations, and cities to try to reach the British camp. A military strategy originally designed to break the plantations of the American South had unleashed one of the great exoduses in U.S. history. With powerfully vivid storytelling, Schama details the odyssey of the escaped blacks through the fires of war and the terror of potential recapture at the war's end." xiv, 478 pp., plus an insert of 16 pp. of glossy plates, some in full color. ISBN: 0-06-053916X.

Condition: Fine in illustrated broads with a half wrapper.