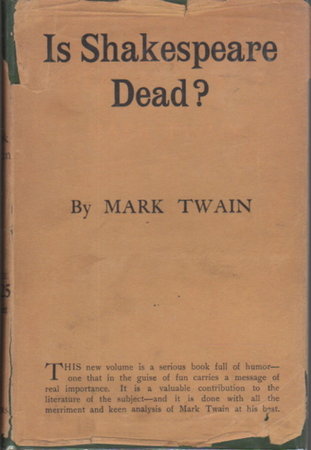 IS SHAKESPEARE DEAD? From My Autobiography.

New York & London: Harper & Brothers, 1909. dj. Hardcover first edition - A discussion, written with Twain's usual humor, of the Shakespeare-Bacon controversy (leading to his conclusion that Bacon must have written the major plays). The second issue with the publisher's note bound in after the title page, but without the ads in the rear. 150 pp.

Condition: Very good in the original green cloth (previous owner's name dated in 1913) in a rather edgeworn but uncommon example of the printed dust jacket.