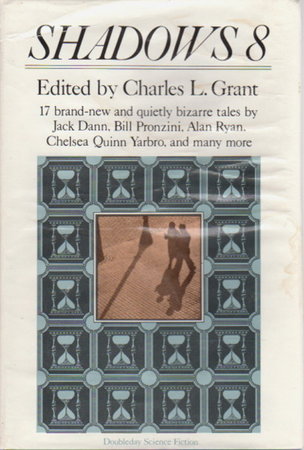 Garden City, New York: Doubleday, 1985. dj. SIGNED hardcover first edition - An original anthology containing 17 stories with an introduction by Grant. SIGNED by Nina Kiriki Hoffman at her story 'The Shadow of the Hawk.' Other stories include Do I Dare to Eat a Peach' by Yarbro, The Blind Man by Jessica Amanda Salmonson; A Demon in Rosewood by Sharon Webb; Blood Gothic by Nancy Holder; Everything's Going to Be All Right by Gene DeWeese; Cycles by Kim Antieau; The Tuckahoe by Nancy Etchemendy; Between the Windows of the Sea by Jack Dann; The Battering by Steve Rasnic Tem; Toy by Bill Pronzini; The Man Who Loved Water by Craig Shaw Gardner; Sand by Alan Ryan; and more. ISBN: 0-385-19823x.

Condition: Ex-library with markings and significant reading wear, in a good unmarked dust jacket (some discoloration to the edge of the front cover and front flap of dj.)