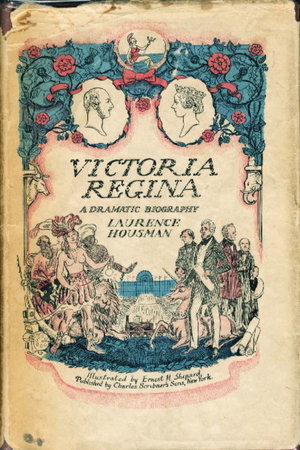 New York: Charles Scribner's Sons, n.d. (ca 1936.) dj. SIGNED hardcover first edition - Sheets printed in England. Illustrated throughout with drawings by Ernest Shepard. The basis of Housman's most sucessful play. A unique copy, SIGNED by Laurence Housman with the words "his signature" underneath (in Housman's hand) the words "Harry Essex, his book." Essex (1910-1997) was a writer, movie director and film producer. This copy is also SIGNED by Helen Hayes (1900-1993), whose starring role in this 1936 Broadway play was perhaps her greatest role ever. Hayes' signature is followed by the words, "his friend" with a line going up to Essex's name. 470 pp.

Condition: Good only in a fair dust jacket. (stain to front cover of book, dust jacket is price-clipped, quite edgeworn, and has some loss in the middle of the spine.)