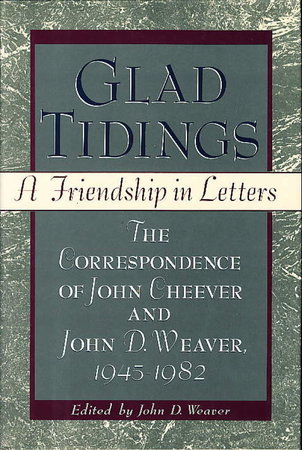 GLAD TIDINGS: A Friendship in Letters: The Correspondence of John Cheever and John D. Weaver 1945-1982.

New York: Harper Collins, (1993.) dj. Hardcover first edition - A remarkable correspondence extending through the "four decades [Cheever] battled with alcohol, editors, publishers, landlords and bill collectors to feed, clothe and shelter his family. The Weavers' home in the Hollywood Hills, where Harriett 'spun the grass and roses,' was the sanctuary shielding him from the demons that dominated his journals. . . these letters span the years between Cheever's first and last books, they offer a consistent and chronological view of his life as a writer: the impecunious early years of his marriage, his devotion to his growing family, his artistic setbacks and successes, his triumph over his addiction to alcohol and his impudent reports on the cancer that ended his life, but not before he had finished Falconer and won the Pulitzer Prize for his farewell collection of short stories." Chronology, checklist of Cheever's writings, and index. 357 pp. ISBN: 0-06-0169575.

Condition: Very near fine in a fine dustjacket. (a new copy, but with a remainder line.)